Should Your Child Have A Professional Acting Career? 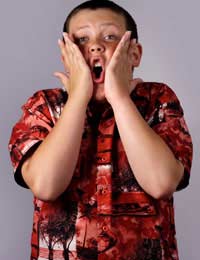 'I want to be an actor!'That simple phrase takes on a much different tone when said by a five year old rather than a twenty-five year old child, doesn’t it?

As a parent or guardian, it’s up to you to protect your offspring. But you also have to nurture them. Consequently, it can be tough to decide whether or not your son or daughter is ready to enter the world of professional acting.

To help you make this potentially family-changing decision, consider the following items before investigating agents or signing contracts.

Is your Child Ready to Become an Actor?

Just because he or she loves the stage or the video camera doesn’t mean that he or she will love professional acting. Chances are, your child has a romanticised notion of what the world of acting is all about; thus, it will be up to you to explain the realities of choosing this type of career, such as:

Are YOU Ready for your Child to Become an Actor?

The parents of a child actor usually are expected to play a significant role in the management of their child’s acting career. However, they are usually expected to 'vamoose' on set. This can be difficult for both the child and the guardian… and usually the guardian takes it much harder than does the resilient child!

If your child enters the world of acting, you’ll wind up ferrying him or her to auditions on a regular basis. Then, you’ll have to wait for him or her in the car park or somewhere away from the action. If your job is inflexible, you may even have to switch to another employer to accommodate a child actor’s busy schedule.

How will you Handle your Child’s Income?

Having a 'star' in the family might be lucrative and fun, but not if you have no plans for the money.

Before your budding actor takes on his or her first work assignment, it’s crucial that you (and he or she) understand how income will be handled. For instance, some parents allow their acting offspring to have a weekly 'allowance' (but nothing too exorbitant.) The remaining amount can be used to pay taxes, cover agent fees and build a savings account.

If you’re a poor personal money manager, you may be wise to hire an accountant or financial planner to control any revenue that your child makes. That way, your child won’t be disappointed when he or she comes 'of age' and there’s nothing monetary to show for all his or her acting efforts.

Can your Child’s Siblings Handle him or her Becoming an Actor?

You’ll be spending a great deal of time and energy on your acting child, ferrying to and from auditions, and that’s time and energy that will be directed away from his or her siblings, if applicable. This could set up some significant family disappointment and jealousy.

Even if you’re certain that your household members can accommodate having an actor in the family, it’s worth sitting down with each individual privately for a heart-to-heart about the matter.

Is your Child really Good Enough to Become an Actor?

This is one of the hardest questions you’ll ever ask, but you need to be brutally honest. Though you adore your son or daughter (as well you should!), you must put aside your subjectivity and consider the bare facts.

It might be that your delightful little boy or beautiful girl has looks, but no acting talent. If you can’t evaluate his or her acting level yourself, pay someone else to do it for you. And listen closely to what you hear—a bad actor, no matter how adorable, is unlikely to get parts at auditions, especially when there are good actors who are just as cute (in the casting director’s objective eyes).

Still convinced you want to forge ahead? Then first and foremost it’s time to investigate reputable acting agents who work exclusively with kids. Ask questions. Take in what you hear and see. Learn from them.

Who knows? You might one day be saying, 'That’s my kid!' to a crowd of his or her screaming fans.

Making a Living as an Actor
Share Your Story, Join the Discussion or Seek Advice..
Hello, I am 14 years old, andfor a very long time I have been wanting to be a actor,but the thing that what has been holding me back is my self confidence,but I am hoping by going to drama club. I will br able to over come my fear and become what I have always wanted to be.
Linaia - 7-Jan-17 @ 6:48 PM
I am 14 and really want to get into professional acting really bad, however it seems as if my mom doesn't want to or isn't ready to get me an agent. Does anyone have any ideas to convince her? Thanks!
Alex - 23-Aug-12 @ 6:12 AM
Title:
(never shown)
Firstname:
(never shown)
Surname:
(never shown)
Email:
(never shown)
Nickname:
(shown)
Comment:
Validate: