Handling Reviews of Your Acting Performance 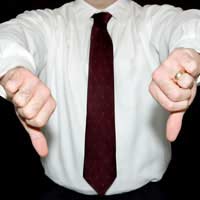 However, if you plan to become a more solid thespian, director, costumer, set designer, or amateur dramatics society volunteer, you must be willing to ask for and use constructive criticism. Otherwise, it will be difficult for you to become better.

Here are some tricks to help you take some of the smart out of theatrical advice from colleagues, journalists, family, and friends.

As you’re listening to criticism, deliberately turn off your emotions. Instead of allowing yourself to take what you’re hearing ultra personally, focus on what is really being said without “reading into it”.

For instance, if someone tells you, “You seemed uncomfortable on stage tonight,” don’t assume that means, “You were awful! You need to quit!” Chances are the person giving the critique isn’t aiming it at your heart but is trying to uncover why you seemed a little less comfortable than you normally are.

Consequently, a good response to such a statement is, “Really? Can you give me a couple of concrete examples so I can work on that for the next performance?”By depersonalising commentary, you can use it to become better, not bitter.

Ask For a Second Opinion

Perhaps someone tells you after a show, “You really were a weak link.” Ouch! But wait… is this individual’s critique valid, or simply the result of his or her own dislike of the play?

If a criticism feels very strangely worded to you, especially if you felt you performed well and others told you that it was your strongest performance yet, you may be wise to get a “second opinion”. Ask your director or a fellow thespian for feedback, and make certain he or she knows you want him or her to be perfectly honest.

As a result, you can gauge whether or not the first critique (“You really were a weak link”) holds water or sinks like a stone.

Don't Live and Die by Reviews

Theatre critics will sometimes review amateur dramatics society performances for print or online sources. But be forewarned that journalists often like to pick shows apart.

Many troupes have an unwritten policy not to read reviews until after the show is over, because negative ones can be so disheartening for the cast and crew. However, that’s tough to abide by, especially if someone you know asks, “Hey… did you see that terrible review of your show that was in the paper?”

Regardless of what critics might say, take their writings with a grain of salt.

Though they may pinpoint some weaknesses that need to be addressed (staging problems, poor direction, bad acoustics, dragging dialogue), some of their viewpoints will be highly subjective and perhaps even intended to cause ripples. After all, snarky commentary often sells papers or drives visitors to blogs and web pages.

Seek Out a Critique Partner

Finally, if you’re in a show with someone you trust, ask him or her to become your “critique partner.” The two of you can help one another become stronger thespians by providing sincere advice based on what you’ve each witnessed over the course of the rehearsal period.

And one final note: If you’re the one giving the criticism, remember to be polite. You don’t have to sugar-coat it, but don’t be nasty, either. After all, you wouldn’t want a report delivered to you that was crudely worded. So be straightforward, but kind.

In the end, it’s important to remind yourself that not all criticisms are accurate or reliable… nor should they cost you a good night’s sleep. If you get a bad review, let it go. Chances are good that a decent one is right around the corner.

Ways To Learn About Acting