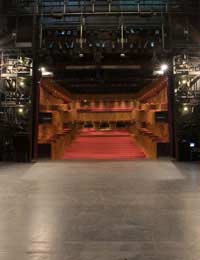 When you’re starting out as an amateur dramatics society it’s important that all your members be up to speed on the ins-and-outs of theatre, including common theatre types in terms of theatrical spaces.

Throughout the generations, actors have performed in a variety of places, and unless you have one specific stage on which your troupe will always perform, it’s likely that your actors, directors, designers and stagehands will need to know about many different potential performing locales.

Below are a few of the more common stage types, including the ways to modify them depending upon their dimensions and, quite honestly, limitations (which should probably be considered “opportunities”!) of your actual space.

The proscenium stage is that with which most modern audiences are intimately familiar. Generally speaking, if you’ve been to a performance at a school, you’ve likely watched a play or show on a proscenium.

A proscenium is rather like a box where three walls are used as the “set”. The fourth wall is invisible to the actors (unless they will be “breaking” this wall by acknowledging the presence of onlookers) and gives the audience a “window” in which to watch the action. In some stage spaces, a curtain can be drawn to essentially “close” the audience from the action and allow scenery to be relocated or actors to move. A curtain can also signify the end of a performance, scene or act.

The proscenium stage lends itself well to traditional and classical dramas and comedies. Additionally, musicals can be handled in such a venue with relative ease, though most musicals do “break” the fourth wall (as with an actor singing to listeners who can hear him/her, though the characters in the play may not be aware of the song.)

The one downfall to a proscenium stage is that it’s difficult (though not impossible) to turn it into something else. Though some can be “tweaked” to become “thrusts” or even “theatres in the round” (see both types below), most are inflexibly constructed.

Still, this is the most well known of the stage types, so there’s no reason to lament if you have the option to perform on a proscenium stage.

-> Helpful Hint: Turning Another Space into a Proscenium

A classroom or standard room can often be modified to become proscenium-like simply by making sure all audience members are seated in parallel rows a la a traditional theatre. Voila! An ordinary room (with or without a makeshift curtain or wings in which actors can change or set pieces can be stored) can turn into a proscenium stage!

A thrust stage is a bit like a proscenium stage that “juts out” into the audience. Essentially, the seats surround three of the four “walls” of the action, allowing the actors to be seen from almost any angle.

For directors and performers alike, the thrust stage offers a plethora of possibilities… as well as some innate headaches!

-> Helpful Hint: Turning Another Space into a Thrust

A simple room can be turned into a semi-thrust by changing the seating from several parallel rows to parallel rows on three sides of the action.

The black box style of stage is what you’d expect from the descriptive term—a large, rectangular (or square) space with flexible seating arrangements. Many times, seating is arranged in a staggered format, meaning that actors are “below” or at the same level with audience members. However, this isn’t etched in stone; a two-tiered set piece could completely change the dynamic by adding several “planes.”

Novice directors may find the black box concept a bit overwhelming, especially if they have not worked with this venue before. Not to worry, though; if your space is limited to a black box, you can usually turn it into something more recognisable, such as a proscenium stage or a thrust simply by arranging the seats in a more traditional manner.

However, if your amateur dramatics group wants to try something a bit more creative, why not offer unorthodox seating plans? As long as you’re comfortable and all audience members are afforded a decent view of the performance, there’s no reason to turn off your imagination, especially when given such a “blank slate”!

-> Helpful Hint: Turning Another Space into a Black Box

Almost any locale can be a “black box”, including an outdoor stage or park area, depending on how well the script you’ll be using translates into an untraditionally spaced piece. (For instance, many of Shakespeare’s works lend themselves to black box theatres.)

Theatre “In the Round”

Any theatrical space that is buttressed on all sides by the audience is considered a theatre “in the round” for rather obvious reasons—onlookers are around the players!

Though most spaces aren’t deliberately designed as theatres in the round, they can often be modified to fit this format. For example, merely having young audience members who are attending a children’s theatrical performance sit on the floor encircling the actors will have a theatre in the round effect.

-> Helpful Hint: Turning Another Space into a Theatre In The Round

Most flexible spaces can be turned into theatres in the round… and some seemingly inflexible ones as well! A few acting groups have even experimented by putting audience members on the back wall of the proscenium stage or thrust stage, thereby creating a highly unconventional theatre in the round experience.