Home > Joining a Society > Finding the Right Troup to Join 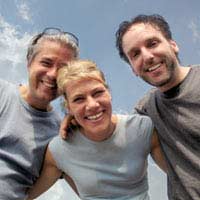 Do any (or all) of these descriptions fit you?

If so, you’d do well to find an amateur dramatics troupe to join. Though you won’t reap huge financial rewards for your work, you’ll be engaged in an incredibly satisfying hobby.

Of course, you’ll have to locate the drama group that best fits your desires, and that will involve some research on your part. Don’t worry though, it’s not terribly difficult and can actually be quite enjoyable.

Here’s how to find the perfect place to showcase your talents.

Make Use of the Internet

Cyberspace holds a wealth of information for any would-be thespian, singer, director or backstage volunteer. Start your online research by visiting some of your local and regional sites. Many of them will list amateur dramatics groups as well as the groups’ latest performances.

Look for troupes whose playbills really 'grab' you; for instance, if you’re not interested in musical theatre, you probably won’t mesh well with a dramatics group that focuses mostly in that arena. As you research via the Internet, compile a list of all the amateur dramatics organisations that catch your eye.

After you’ve started developing your list based on your cyber research, grab a calendar and plan to attend some performances. Until you see the calibre of the troupe, it will be difficult to gauge whether or not you’ll comfortably fit into their midst.

When you’re watching each performance, ask yourself if the mood and bond between cast members seem to be positive. An ill-fated amateur dramatics group can’t hide their lack of commitment, especially onstage. You’ll likely sense if a production seems to be unusually stilted or poorly directed.

Set Up a Time to Talk with the Troup

Many amateur dramatics teams will have at least one 'point person' to talk with individuals like you, who would like to join the troupe. Set up a time to meet with him or her and conduct an in-depth research 'interview' regarding the organisation.

Ask questions that are pertinent to your areas of interest. If you want to direct, for example, make sure that they are open to cultivating new directors. If you’re interested in acting, check to ensure that they don’t merely use the same performers again and again, essentially making it impossible for 'outsiders' to garner juicy roles.

Offer to Help Out on a Show

Now that you’ve narrowed your amateur dramatics group choices down to one (or a few) troupe(s), it’s time to really find out how the troupe works together. Thus, your final research step is to offer some backstage assistance for an upcoming performance.

While you’re helping in the box office or behind-the-scenes, constantly ask yourself, “Is this an atmosphere in which I will be able to grow as a performer, director or artist?” If the answer is “no”, you’ll know that your research on that particular troupe has essentially ended. You shouldn’t pursue them further until they’ve made significant changes in their operating methods.

On the other hand, if you’ve discovered a place that feels 'like home', congratulate yourself! Being part of a thriving, constructive amateur dramatics group can be one of the most rewarding experiences you’ll ever have.